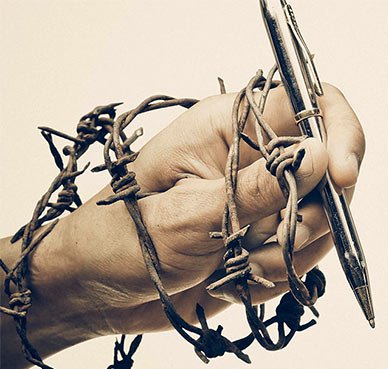 “Targeting journalists puts everyone’s liberties at risk,” warned Harlem Désir, OSCE Representative on Freedom of Media, two weeks ago at the “Journalists under Attack” conference in Vienna. “With the increasing contempt for the press, more and more people believe that it is acceptable to attack the messenger because they do not like the message, and silence journalists because they are too critical or just tell the plain truth.”

The attacks on journalists have increased worldwide, also within the EU and in Austria. More and more blatant attacks by politicians on journalists and media houses are intended to intimidate or silence them. For the World Press Freedom Day on 3 May, there is little cause for celebration:-

Attacks on journalists are becoming commonplace in Europe too, as was made clear in a report about serious threats to media freedom issued last February by the 12 media and NGO partners of the Council of Europe‘s online Platform for the safety of journalists, including  the Association of European Journalists. The report warned that Europe’s freedom of the press is currently “at risk as never before since the end of the Cold War.” Last year alone, 140 serious attacks on journalists and media, including dozen of violent assaults, were reported in 32 of the Council of Europe’s 47 member states.

Media organizations complain of a double problem: In addition to the growing attacks comes the impunity for perpetrators: According to the OSCE for the last 25 years remained 85 percent of physical attacks on journalists in the 57 countries of the organization without thoe responsible being identified and punished.

In the EU, after the terrorist attack on the editorial board of “Charlie Hebdo” 2015 in Paris, more cowardly assassinations took place in the past two years. The investigative reporter in Malta, Daphne Galicia Caruana, was killed in 2017 by a carbomb. A year ago, the Slovak investigative journalist Jan Kuciak was shot dead in his home with his fiancé. In both cases, the true initiators have still not been held accountable. And it was not until April 19, the journalist Lyra McKee was shot in riots in the Northern Irish town of Londonderry.

More than a hundred journalists are in jail in Turkey with questionable allegations. Only last week, six employees of the newspaper “Cumhuriyet”, founded by Atatürk,  were arrested again. And in October 2018, the journalist Jamal Kashoggi was murdered by a killer squad who had come from Riyadh in the consulate of Saudi Arabia in Istanbul.

The role of the media as the fourth power in the state has become increasingly unpleasant for many politicians. Former Slovak Prime Minister Robert Fico called journalists “filthy prostitutes” in front of live cameras. Czech President Milos Zeman expressed the hope that journalists may soon be “a dying out species”. In Poland, media that criticize the right-wing national government were covered with court proceedings for defamation. In Romania, which is currently chairing the EU, critical media have been charged under false reference to the EU’s General Data Protection Regulation on the publication of names of informants. In Hungary, more than 400 newspapers came under the control of a single foundation of entrepreneurs in the orbit of Prime Minister Viktor Orbán last year.

However, threats and physical attacks on journalists also increased in Italy, the Netherlands and France. In the Netherlands, a media bureau investigating organized crime was shot at with a bazooka a year ago. In Italy, Interior Minister Matteo Salvini wanted to end the police protection for many journalists threatened by the mafia. In Germany, far-right parties continued their attacks on their favorite opponents of the so-called “lying press”. Unfortunately, some media have helped them. For example, a journalist was able to spread fake interviews and reports for years at “Der Spiegel”, thereby earning numerous awards.

Even in the former model country of the free media, the United States, quality papers experienced unusually sharp attacks by politicians. US President Donald Trump likes to insult media outlets as a “fake news” disseminator and personally banish unwelcome journalists from the White House Press Room.

Soon a British Court will decide on an extradition of “WikiLeak” founder Julian Assange to US justice. Despite some reservations about its methods, the “Association of European Journalists” led by me rejects its extradition. Because that would only strengthen those forces who want to silence investigative media and platforms including whistleblowers. Ultimately, they want to limit the independence of the media and free reporting.

These methods are on the rise worldwide and are no longer limited to war zones or countries with dictatorial or autocratic regimes as they were many years ago. In Britain, in many cases blatant lies against the EU and its politicians, especially in tabloids, have had a major impact on the outcome of the referendum on the country’s exit from the EU. The recent self-accusation of a famous Brexit supporter, the prominent columnist Peter Oborne, who had previously attacked the EU for years in the “Daily Mail” surprised many: For Oborne now pleads for a stay of Britain in the EU, also with reference to economic disadvantages like the closure of factories.

The situation in Austria unfortunately follows the Europe-wide and international trend. Austria slipped from 11th to 16th place according to the new press freedom index of “Reporters Without Borders”. This is mainly due to attacks from the FPÖ and their environment on media workers. Vice Chancellor Heinz-Christian Strache repeatedly attacked the ORF and the ZIB-2 anchorman Armin Wolf, who last week was massively reprimanded by FPÖ’s leading candidate for the European elections, Harald Vilimsky. The boss of the ORF Board of Trustees, Norbert Steger (FPÖ), who had already threatened ORF correspondents with cuts, recently suggested to Wolf “to take a sabbaticel break”. And Minister of the Interior Herbert Kickl wanted to sanction via press secretary “critical” newspapers with less information.

Austria’s Federal President Alexander Van der Bellen rightly warned against a brutalization of the language in the political debate. Because freedom of the media is a worth protecting and increasingly threatened fundamental right in every functioning democracy. Even politicians who buy benevolent coverage with threats and subsidies have no interest in independent media and pluralism of opinion. The EU Commission has now recognized this: It is planning its own working group to defend and preserve the freedom of the press.

— Otmar Lahodynsky, 64, has been President of the Association of European Journalists (AEJ) since 2014. Born in Linz, he is the editor of the news magazine “profil” and was the correspondent of the “Presse” in Brussels from 1988 to 1995 and then deputy editor-in-chief. With Wolfgang Böhm (“The Press”) he wrote the first textbook on the EU (“EU for you!” G & G-Verlag), which is available in seven foreign-language editions —