Αρχική ΕΚΔΗΛΩΣΕΙΣ Congress Paris Congress: Press freedom and the safety and security of journalists in... 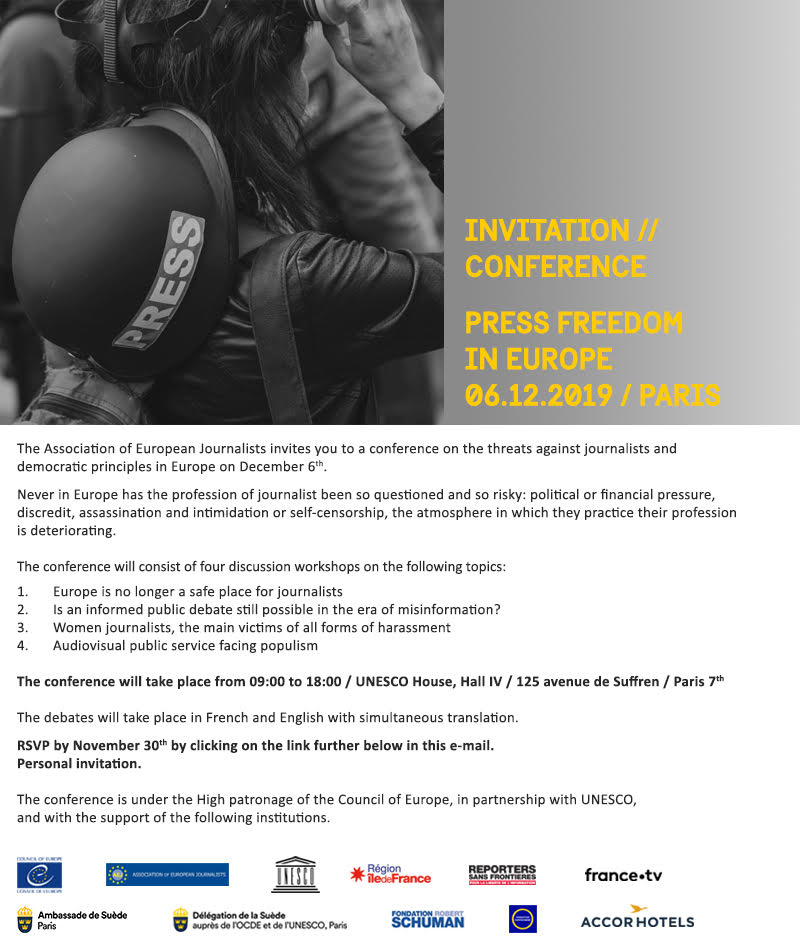 The Association of European Journalists is organizing a major European conference examining the state of press freedom across Europe on December 6th of December2019.

The event is AEJ’s 2019 Annual Congress. It will be hosted by the French Section of the AEJ with participation by other national AEJ sections. It will take place at UNESCO’s headquarters building in Paris with additional support from the Council of Europe. The conference room can accommodate up to 350 people.

The AEJ’s intention is that the conference will highlight the acute threats to media freedom and to the vital role of the media in the democratic process in contemporary Europe. Conclusions and recommendations from the gathering will be communicated to the relevant authorities in UNESCO, the Council of Europe and the European Union, reflecting the urgent need for new measures to safeguard press freedom and the safety and security of journalists in all parts of Europe (« Appel de Paris »).

On Saturday December 7th the AEJ will hold its annual General Assembly at the Maison de Jean Monnet in Bazoches-sur-Guyonne about 45 kilometers west of Paris, with the kind cooperation of the Jean Monnet Association, European Parliament and the AEJ Belgian Section.

Never in Europe’s history have journalists been as threatened and at risk as today. Political or financial pressures, discredit, murders, intimidations or self-censorship, their environment becomes more and more hostile.

What reaction should European journalists have? How can they find their place back in the democratic systems?

The Brexit referendum, and the national and European elections have been sullied by a growing number of political manipulations. It has come to a point where having a serene public debate and being correctly informed get more and more difficult.

What weapons are at the service of European media?

If gender equality is at a better state in Europe than anywhere else in the world, female journalists of the old continent are also victims of sexual and moral harassment.

Some of them accepted to share their stories, some advice and possible solutions.

Public audiovisual media at the time of populism and “illiberal democracies”, or how to guarantee a public service that has the best interest of all citizen at heart and doesn’t serve the purpose of the governing party.

Stories, good habits to take on and possible solutions.

The Conference is under the High patronage of the Council of Europe, in partnership whith UNESCO, and with the support of the following institutions :

Embassy of Sweden in France